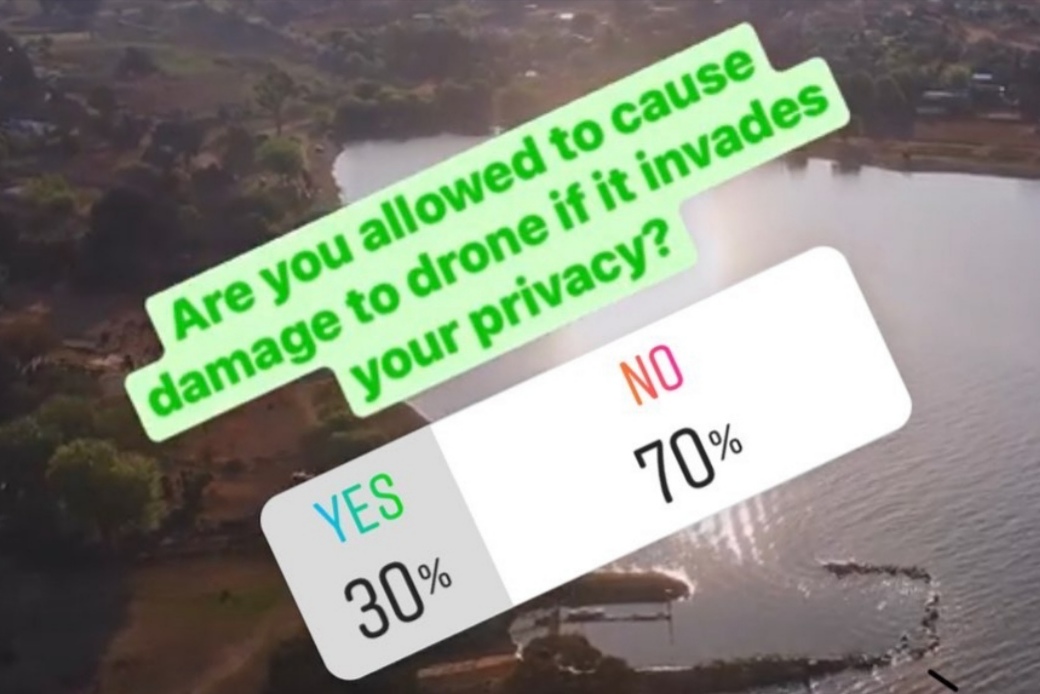 Few days ago, I “committed” a story on my drone Instagram account @drones.n.pixels – I archived it as Drone Intrusion, so have a look 😊

It was about incident that happened to me recently. It appears that someone took a shot at my drone. To my knowledge, I was not over anyone’s property, but this is actually completely irrelevant for now as we will be looking at situation when a drone actually does harass you. I don’t know, if this was in fact real shot or a tyre blow out, but I didn’t want to bother anyone or risk my drone or to, so I quickly landed.

In that Instagram story, I described the incident and made a quick poll as to what can be considered “allowed” in terms of course of action in a real life scenario when drone invades your privacy. And I mean grossly – like drone hovering over a balcony or a garden (not case of some drone 50 or 100 meters above in the sky). I then listed some potential behaviors of the Drone Intrusion Victim. In the end I asked what my audience think is legally allowed in situation like that. Here is how it developed…

In most cases (70%) answers were correct and representative for South Africa and EU (I hold SA RPL as well as A1/A2/A3 in EU open category).  South Africa or any of the EU countries does not LEGALLY allow the Drone Intrusion Victim to take ANY aggressive action against the drone, even in case of severe privacy invasion.

It appears that in South America, USA and Russia law is different, but I am not able to confirm this in terms of legal standing as yet (I will have to ask question on international Legal/Drone forums and see the responses, I’m certainly intending to do that).

30% of my readers and followers however, think, that you can in fact damage the drone. I published the results as part of the story with advice, to think twice and this is certainly not legal (although perhaps understandable) and… It seems that I hit the nerve of some of my audience…

I think the fact that you can only respond to Instagram stories by private message made this worse. I received few personal messages from people very strongly not agreeing with “me”, to which I responded, of course as DM, because Instagram does not allow otherwise. So it does perhaps look like I’m a drone flying stalker, that has to be blocked and unfollowed (which some of my audience did, ouch, that hurt !)

What does the LAW say?

So now back to the point – WHY can’t you legally and without consequences damage a drone that bothers you and invades your privacy? Well – first of all, most people that decide on this course of action reach (at least in South Africa) for an air rifle or a shot gun. The legality of not being allowed to do so, does not actually stem only from aviation law.

It stems from Firearm Control Act Section 120(7) that very precisely prohibits to discharge firearm in a residential area altogether. Shooting at drone cannot be considered by any law as self-defense, but even in self-defense cases victims are charged prior to their charges being dropped. If you do discharge a weapon (air rifle included) you will risk losing your firearm license at the very least.

Another law preventing damaging a drone that harasses you is the aviation law, according to which you may not interfere with flying aircraft or it’s signal to bring it down, as well as civil law that prohibits anyone from taking law into your hands and dishing out their own perceived justice.

THIS IS THE LAW… LIKE IT OR NOT… Not “me” stating my opinion or giving advice.

What about the drone pilot?

Well, the drone pilot is most likely committing an offence as well, or even few of them.

First of all, in South Africa the drone should not fly closer than 50 m (in lateral distance) from uninvolved people and buildings. Uninvolved people mean anyone that does not know and agree to the drone flying. So you can fly a drone over your own, or friends property and film a party or event. But as a drone plot, you are not permitted to fly close and over neighbors property without asking for permission.

Aircrafts are exempted from this, if they fly at “reasonable height”, but the South African Aviation does not define what that “reasonable height” is. This will most likely be tested in court one day and defined once someone gets prosecuted (it has not happened yet). Contrary to South Africa, flying over properties is permitted in EU (certification in relevant category A1 or A2 is required). It is quite likely, that once someone gets prosecuted, SA will adapt the EU interpretation.

Other than that, the drone pilot is committing offence against privacy (now also regulated by POPIA) because they are not allowed to film anyone who does not wish to be filmed (except from distance of 50 m). If you see a drone flying at distance, it is relatively safe to assume that you are not the object of their filming.

One other law that drone pilot might be braking is trespassing. It is possible to be more than 50 m from people and buildings, but still over someone else’s property (which possibly was the case when I was flying). Unfortunately, that can happen without pilot knowing as you can’t see boundaries of properties on fly maps that drone pilots use. And that sucks…

What can you do as a Drone Intrusion Victim?

Since you are not legally allowed to interfere with the flying drone, you can only do two things – report this to the police and report this to SACAA (gathering all the evidence).

SACAA are obliged to act on complaints and as far as I know they are taking the matters seriously, although it will probably not be their top priority.

I always encourage to try to speak to the pilot and try to find out what they were doing. It is very possible that they didn’t even realize that they were making someone uncomfortable.

What about the “broom”?

If the drone is close enough to be taken down by the broom, or a frisbee,  or a tennis racket, the pilot probably knows they shouldn’t be where they are.

In case of accidental damage, you can always argue that you were just playing and the drone was in the way 😃 This is not a legal advice though and don’t take my word for it.